Is the lack of support forcing Cameroonian artists to lie that Foreign artists endorsed them via inbox ? What a mess

The Cameroonian Entertainment industry is a huge jungle filled with thousands of artists fighting everyday to be heard , seen and most importantly to make a monetizable name for themselves .However , A new trend which has surfaced on our space is that these artists lie about the fact that foreign artists have endorsed , supported and recommended their brand ,event or musical project. 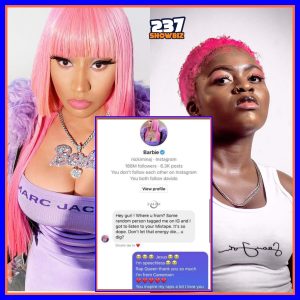 A Screenshot of Nicki Minaj’s Fake Dm to Peace T

This phenomenon has been rising faster than the amount of hit songs in our Industry .It all starts usually with either a photo-shopped screenshot of an Instagram or

Facebook Dm from a foreign a rtists or An edited voice-note to say this artist is endorsed . A mess which reflects desperation and an endless need for validation .

An example of this phenomenon is the alleged Dm American Singer Nicki Minaj sent to rising female Rapper Peace T which is everywhere . 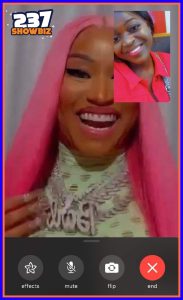 While this was a strategy by her team to market her new EP “Trap Queen” . One can only wonder about the damaging effects of such stunts in the long run .Imagine if Beyoncé contacted Salatiel and he posted a Screenshot of his chat with her , He might not have worked with her in the first place due to such Unprofessionalism

Mic Monsta advised us a few months back that let the work speak for young artists and as such , “Trap Queen” should speak for Peace T and not a Nicki Minaj Dm because when it’s all said and done all that will be left is the music .

We could also affiliate this trend to Lack of Support but support is a form of respect which comes organically based on work ethic and quality .So if our artists aren’t having support , they need to work harder, the time concentrated on short term trends like these could be time used to increase the output of a song .We have to clean this mess together or else , our artists especially the rising ones will hardly have long lasting careers & will keep on making 4 steps back and 1 step forward .