Cameroonian Singer Libianca’s “People” is No.2 on the BillBoard U.S. Afrobeats Songs Chart

Cameroonian Singer Libianca’s “People” is No.2 on the BillBoard U.S. Afrobeats Songs Chart

Afrobeats has a new “Queen”, she’s Libianca from Cameroon whose hit song “People” is topping all charts.

Cameroonian singer Libianca and her global hit single entitled “People” on week 14 January 2023 landed itself on No. 2 on the Billboard U.S. Afrobeats songs chart. Coming from 5th position on week 7 January 2023. The song beat Tems‘ “Free Mind“, Burna Boy’s “Last Last” and Wizkid’s “Essence” to earn a 2nd spot on the chart. “People” by Libianca is on step away from reach the highest peak position occupied by “Calm Down Remix” by Rema and Selena Gomez. “People’ debuted No.9 on the U.S Afrobeats Songs Chart. 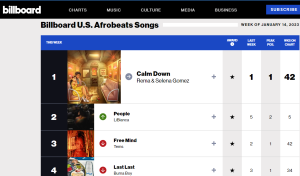 “Calm Down” has been holding the No.1 spot for the 42nd week at the time writing this report. Looking at the charts, Libianc’s “People” is steadily eyeing the No.1 spot as it is currently topping other charts such as Spotify’s Viral 50, it also made it’s debut at No.149 on the Daily Global Spotify Charts with 1.049 million streams.