Daughter of Cameroon’s president Brenda Biya is making the news again. This time she isn’t fighting with an outsider, rather she is taking both her parents to the slaughter house. The first daughter via Snapchat posts has disowned her parents who happen to be the presidential couple.

Via her snapchat, “Anastasie Brenda Biya” , Brenda Biya reveals her parents will never hear from her again, she also stated that a father/daughter relationship shouldn’t be a dictator submissive one.

“I ain’t got no parents. From the go they been absent, never raised, never gave me love like an actual child. Everything is fine as long as you in their power grasp. All they care about is their image” – Brenda Reveals more. See screenshots of her snap chat stories below; 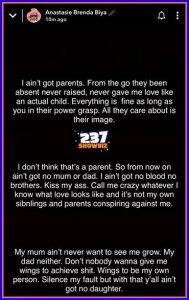 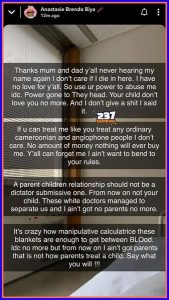