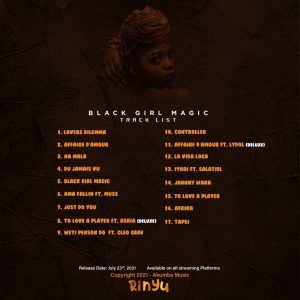 Black Girl Magic is a depiction of the sheer strength of this young urban African woman RINYU. A project with main goals to create a legacy for herself. Black Girl Magic defines Rinyu’s sound and offers a telescopic view into her into her musical journey as she sets out to conquer AFRICA and the world.

The album is available on Major Digital Stores. Stream, Download and leave behind your remarks. Stream/Download