STOP BEING A TOURIST, START BEING A TRAVELER

What is there more to love than traveling?

Life is all about experiences and unlike material things, experiences stay with us no matter where we go. Traveling is a unique and invaluable experience as it is the best way to fully comprehend the world. We experience life in different ways, explore new places, culture, cuisines, traditions and ways of living. But most importantly, sharing these travel experiences with others is what makes it an enriching life experience. We can easily connect with our food, new places, music and culture in beautiful ways and these connections and memories may last a lifetime.

Travel with Dr Awah is a travel Vlog/Blog showcasing the wonderful traveling experiences around the world. 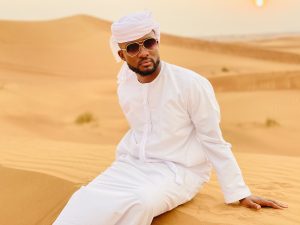 Dr Awah is a U.S based travel Vlogger/Blogger who travels around the world, showcasing beautiful cities, food, traditions, culture and sharing the experiences of his travels. He has traveled to several parts of the world from Africa to Europe to the Middle East, Caribbean’s and Southern America just to name a few. He documents both the professional and personal experiences of his travels. His most recent travel was in the middle East where he visited some of Egypt’s ancient and historical iconic places.

THE BEST STORIES ARE FOUND WITHIN THE PAGES OF A PASSPORT

Egypt is a site of one of the oldest civilizations in the world dating back to 5500BC. 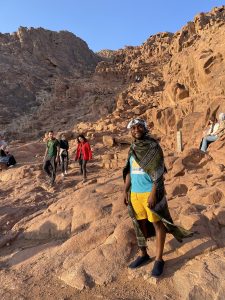 The Burning Bush was a supernatural phenomenon described in the third chapter of the book of exodus in biblical history. It is located in St Katherine in the Sinai Peninsula. The bush was moved to its present site when Helena’s Chapel was built over its roots. Its is still of a major attraction in the Sinai region.

The Red Sea(Gulf of Aden) 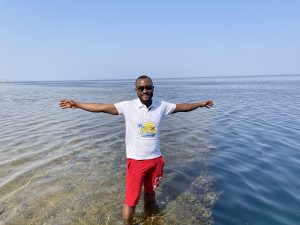 The Red Sea(Gulf of Aden)

According to history, the first exploration of the red sea started around 1500BC AND 2500BC. Egyptians built many canals across which non of the canal lasted. It was also mentioned heavily in the biblical book of exodus which describes the holy crossing or the split of the waters of the red sea. It occupies part of the Rift valley of width 355km, length 2,250km, water volume 233000km3 and surface area of about 174000square miles. See more pictures of the red sea. 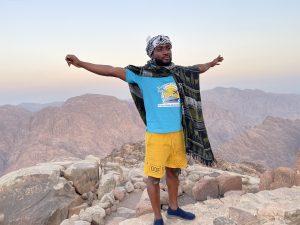 Mount Sinai lies in the Sinai Peninsula Egypt and rises 2,285m above sea level. The Ten Commandments according to biblical history GOD Gave to Moses is also one of Egypt’s historical antique which has been there for centuries. 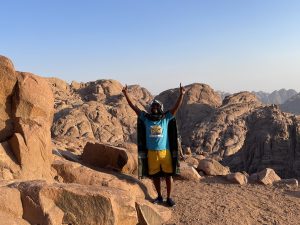 See more pictures of the ten commandments in Mount Sinai. 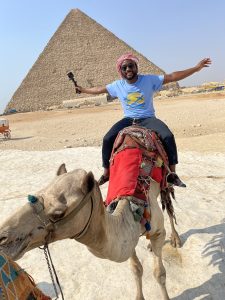 The Great Pyramids was named one of the seven wonders of the Ancient world in the 2nd century BC and it is the only one still standing. The Pyramids housed the Tomb of Ancient Pharaohs. The architecture of these structures is so extraordinary that historians are still unsure exactly how ancient Egyptians built them without the help of modern
engineering.

After 4500years of exposure the pyramids still stands till date. The Giza Plateau carries the Pyramid of Khufu, Menkaure, and Khafre which came about the name (THE GREAT PYRAMIDS). See more pictures of the great pyramids.

As a child I always thought landmarks in the bible such as Mount Sinai were rather fantasies or already lost times. I was thrilled to see some of these places in real life and knowing that these places are still in existence today. It was breath taking to watch the sunrise at the Mount Sinai summit and an extraordinary experience. Travel, meet new people, make connections, see new places, traditions and culture because what you need in order to comprehend what the world feels like, is found between the pages of your passport.